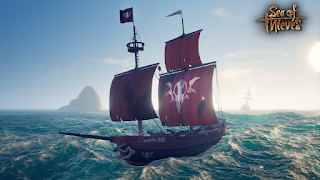 Rare's Sea of Thieves is getting pirate ships and a treasure chest full of new content. This should bring waves of players back to the game when it’s biggest update yet hits on July 31 for free. These new additions will be introduced in a new three-week-long campaign called Cursed Sails. This time-limited story pits you against A.I.-controlled skeleton ships that are terrorizing outputs and pirates on the high seas. To combat this new threat, players can set sail in a new three-player Brigantine ship, and even work with other players to gain bigger rewards through alliances. If you get deep into this story, and want to know where the origin of the skeletons, you can take on a new side quest. If you arrive to the part after the three-week campaign ends, you'll only miss the story. All of the content that comes from it will remain in the game. Check out the Cursed Sails brings in the video below.