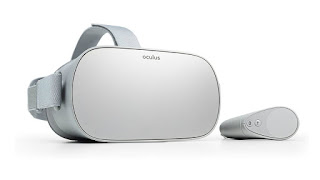 Oculus G, the all-in-one VR headset that isn't powered by a PC or phone was announced last fall, but now, for $199, you can get an Oculus Go VR Headset that contains 32 GB of storage (the 64 GB model is $249). While this headset doesn't need to connect to a phone or PC for power, you will need to connect to a free iOS or Android mobile app during setup. The Oculus Go headset is powered by a Qualcomm Snapdragon 821 chip paired with Oculus’ automatic Dynamic Throttling feature that theoretically offers a smoother frame rate. Meanwhile, the Go’s new display panel features 538 pixels-per-inch for a resolution of 2560 x 1440. Obviously, battery life will vary based on use, but a built-in lithium ion battery should provide about two hours of playtime for games or up to 2.5 hours for streaming media and video. Go users will have access to a variety of content, which includes (text from Oculus):