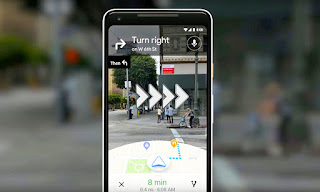 Ever get lost using Google Maps ? Google wants to fix that. That’s why Aparna Chennapragada is showing off an updated version of its VPS, or Visual Positioning System: A way for folks to avoid getting lost when out and about. Rather than craning over your phone and hoping you're walking in the same direction as the blue GPS dot, the camera can look at your surroundings and work it out for you. For example, if a person walks out of the subway  and they don't know where they're going, they simply hold up the phone and launch the camera. Lens will then identify where you're standing and compare it to Google's database of Street View images in the region. Once the system has your position, an arrow overlay will pop onto the screen, telling you if you need to venture left or right. The company hasn't said when this is coming to phones, although it may be built out as part of a wider integration with Google Lens.