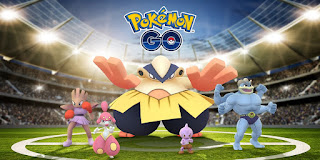 The official Pokemon GO blog has announced that fighting-type Pokemon will appear more frequently in the game until May 14. You’ll find a variety of Pokemon including Machop and Makuhita appear more often in the game, and that’s not all. Read on for the full details:
“Until May 14, you’ll receive 2× bonus XP for Gym Battles and Raid Battles. Plus, Raid Battles will also award a guaranteed 3,000 Stardust for participating—and at least one Rare Candy if you win!
Several actions at Gyms will yield bonuses, including a 2× Badge multiplier, so you can receive even more benefits at a Gym you visit frequently. Just stopping by? Spinning the Photo Disc at Gyms will also yield more items!”