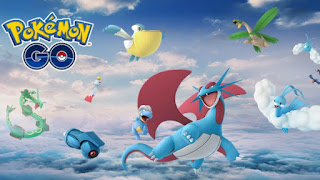 The official Pokemon GO blog has announced that a number of Pokemon from the Hoenn region will be available in Pokemon GO starting from February 9th. The team revealed that Legendary Pokémon Rayquaza will also become available in Raid Battles. Here’s all the details:
“Prepare for exciting new adventures as you encounter even more Pokémon originally discovered in the Hoenn region on February 9! Alongside several Flying- and Dragon-type Pokémon appearing in Pokémon GO for the first time, the Legendary Pokémon Rayquaza will descend from the ozone layer and become available in Raid Battles for a limited time.
In celebration, Pokémon originally discovered in the Hoenn region will take over wild encounters until February 13. Don’t miss this unique opportunity to catch powerful Pokémon such as Salamence, Altaria, Metagross, and more!
The Legendary Pokémon Rayquaza will be appearing in Raid Battles in Gyms near you until March 16. You’ll also have a chance to battle the Legendary Water-type Pokémon Kyogre before it swims away on February 14. Will you be the first to catch all three ancient Legendary Pokémon originally discovered in the Hoenn region?
Even more surprises await nearby! In addition to these Pokémon being available in the wild, you might see some different Pokémon in Raid Battles at your nearby Gym, and from hatched Eggs.


With all of these Pokémon to catch and power up, it’s important to stock up on supplies. Starting February 9, new special boxes–which include Raid Passes, Incubators, and Star Pieces–will be available in the in-game store until February 23. In addition, Lure Modules will remain activated for six hours until February 23! These items will be perfect aids in your Pokémon GO adventure.”
Posted by 9To5TechNews at 3:30 PM