Changes To Mei, Doomfist, And Sombra Coming To PTR For Overwatch 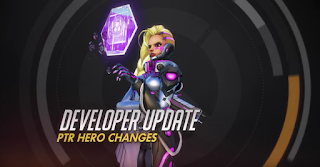 In the latest developer update video for Overwatch, game director Jeff Kaplan explains  changes for Mei, Doomfist, and Sombra in the PTR. Mei has been buffed with her freeze duration going from 1 second to 1.5, and a few extra shots have been added to her secondary icicle fire. Doomfist's ammo recovery to his hand canon has also increased. Sombra receives some of the biggest changes with her ultimate no longer charging through use of her hacked health packs. Instead, her weapon damage will now be responsible for charging her EMP so changes have been made to her gun to help with this.


Hacking health packs to build up her EMP is something frequently used, so if these changes do get pushed through to the main game we could see some follow-on changes there. It will now also take less time to hack an enemy hero and may stop more abilities than it did previously. Lastly, her trans-locator ability will take longer to expire, giving players more of an opportunity to get out of sticky situations. Lastly, changes to Hanzo’s scatter arrow ability have been implemented to give him further mobility.