Call Of Duty 2018 Rumored To Be Black Ops 4, Might Come To Switch 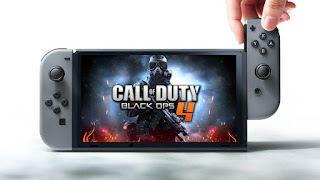 Rumors are swirling around that the next game in the Call of Duty franchise is Black Ops 4 and could be making its way to the Nintendo Switch. The news was picked up by Marcus Sellars who VG247 says was correct in predicting Labo and Dark Souls for Nintendo Switch. As always this is a rumor, so we’ll have to wait and see.

“COD 2018 is Black Ops 4 and is coming to PS4/Xbox/PC/Switch. It is set in the modern times and is boots on the ground. The Switch version will support DLC, HD Rumble and motion controls. The Switch version is also being ported by a company which is familiar with COD games.”
Posted by 9To5TechNews at 7:52 PM