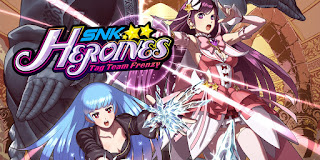 During the conclusion of EVO Japan, a new SNK Heroines: Tag Team Frenzy trailer was released. The new trailer establishes that the cast of SNK heroines were called to a castle by an unseen evil force and are now battling it. The trailer also does a fairly deep dive into the customization menu and what appears to be a model viewer with a security camera filter. You can check out the trailer below. SNK Heroines Tag Team Frenzy is releasing on Switch and PlayStation 4 this summer.