Sega Bringing Back House Of The Dead To Japanese Arcades 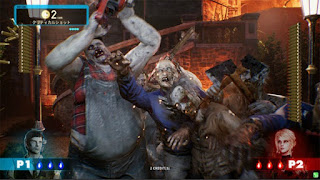 Sega has announced a new House of the Dead game. Simply titled House of the Dead: Scarlet Dawn, is set to be released in Club Sega, the publisher's own arcade in Tokyo with a single cabinet. It’s two player and features some gimmicks like an air cannon and moving seats within the cabinet. That makes it sound too expensive to end up in any smaller arcades. House of the Dead: Scarlet Dawn is  out next week at Club Sega. There is no word on whether the game will ever come to consoles.
Posted by 9To5TechNews at 10:17 PM

Email ThisBlogThis!Share to TwitterShare to FacebookShare to Pinterest
Labels: House of The Dead, Japan, SEGA, Tokyo