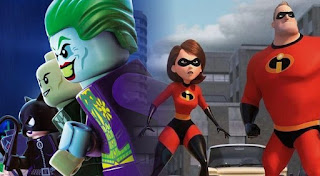 LEGO Dimensions is done, but something new could be on the horizon. ComicBook is reporting that “according to sources linked to WB, a LEGO video game based around Pixar’s The Incredibles franchise is next on the slate. Rumoured to be titled ‘LEGO Incredibles 2’, the game is said to tie directly into the upcoming, long-awaited sequel movie, which is set for a June 15th, 2018 release around the world. As of right now, details are sparse about the rumored project, but it doesn’t take much to imagine what it could entail.”.


But that is not all. “Warner Bros. is also said to be prepping a new LEGO game based around DC Comics characters. Whereas past games of this nature have focused on LEGO Batman and his fellow Justice League heroes, this rumoured title is said to be all about the villains of the DC universe. Again, few details about this apparent game are available thus far, but our sources are referring to the project as ‘LEGO DC Villains’ or ‘LEGO DC Supervillains.’ It’s said to feature LEGO renditions of DC staples such as Harley Quinn, The Joker and Lex Luthor”. Both games are supposedly in development by TT Games. An announcement of LEGO Incredibles 2 could be coming very soon. This is because the Incredibles 2 movie is slated to release in just 6 months. As for LEGO DC Villains, ComicBook says that “we were told by two sources that the title is currently expected at some point over the next year”. LEGO games tend to release on multiple platforms, so it isn’t out of the question that both games may release on the Nintendo Switch.
Posted by 9To5TechNews at 7:48 PM