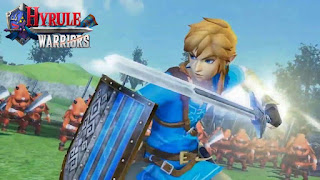 During the Nintendo Direct, the company announced. Hyrule Warriors is getting a definitive edition. It’ll contain all the characters and stages from both the Wii U and 3DS versions of the game. The Switch version also adds both versions and adds outfits from Breath of the Wild for both Link and Zelda. The game now boasts 29 playable characters, which is 16 more characters than the game launched with on Wii U. The Switch port will also have local co-op, which can be done with the joycons. Hyrule Warriors: Definitive Edition will be releasing on the Switch in Spring 2018.


UPDATE 3/8/2018 - Durning the March 2018 Nintendo Direct, it was announced that Hyrule Warriors: Definitive Edition will be releasing on May 18 for Nintendo Switch.

The heroes and villains of The Legend of #Zelda series are about to spring into action when #HyruleWarriors: Definitive Edition launches 5/18, only on #NintendoSwitch! pic.twitter.com/iUy58PBl3E
— Nintendo of America (@NintendoAmerica) March 8, 2018