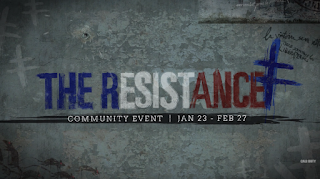 Activision has announced a time-limited event for Call of Duty: WWII titled The Resistance. The event begins on January 23 and lasts until February 27. The Resistance brings a new Division to the game, also called the Resistance, which provides a new player class to the game with its own class-specific skills and perks and a focus on close-range combat. The event reintroduces Prop Hunt to Call of Duty, a hide-and-seek mode where a player takes the form of an in-game object and does their best to blend in without being found. It also brings back Demolition. Players can also receive the Orso SMG, combat knife, and Volkssturmgewehr assault rifle through completing Orders. The event ends just ahead of the game's first DLC pack, also called The Resistance, which launches on PlayStation 4 on January 30. It includes new maps for War Mode, Zombies, and three maps for multiplayer. The DLC will come to Xbox One and PC a month later.