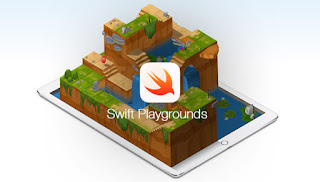 Apple has updated Swift Playgrounds, a free iPad app to teach kids of any age basic coding skills in Swift, to version 2.0. Now you can subscribe to playgrounds from your favorite third party creators, then browse and download their content directly within Swift Playgrounds. Other changes include:

Playgrounds is designed to teach basic programming concepts like loops and conditionals using an animated character that the budding programmers direct by writing code. The app offers suggestions for code to be used, and Swift Playgrounds also has a special iOS coding keyboard to ease entry of all of those pesky brackets.
There's a "Fundamentals of Swift" lesson that teaches the basics; more advanced concepts can be explored in further lessons. Code is created on the left side of the iPad screen, and then results are immediately viewable on the right side of the screen with the tap of a "Run My Code" button. Should developers want to see a full-screen view of their handiwork, it's easy to just swipe the window to take advantage of the complete screen size and resolution.
Once the lessons are over, Swift Playgrounds has a collection of challenges that can be undertaken, and Apple plans to add new ones over time. In addition to the coding keyboard, there is also a Snippets Library to hold commonly-used pieces of code, a keypad that automatically pops up when typing numbers, and a feature called Touch to Edit that developers drag the boundaries of a statement around existing code.


Finally, if developers wish to move their projects to Xcode to try their hand at developing "real" apps for iOS and macOS, it's possible to export code to Xcode from Swift Playgrounds. Code can also be shared with other Playgrounds users through Mail, Messages, or AirDrop.
Posted by 9To5TechNews at 9:24 PM