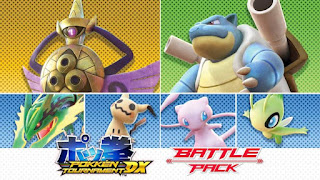 During the Nintendo Direct, the company announced Two new DLC waves coming to the Switch version of Pokken Tournament that add new fighters and new support Pokemon. Wave 1 releases January 31 and it will add Aegislash as a playable fighter and support Pokémon, Mimikyu and Mega Rayquaza. Wave 2 releases March 23 and will add Blastoise as a playabale fighter and support Pokemon, Mew and Celebi. Both waves of DLC are available for purchase now.
Posted by 9To5TechNews at 12:21 AM