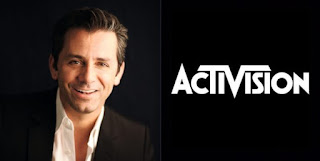 
“Serving as Activision’s CEO has been an honor and a thrill,” Hirshberg said in a statement release today. “This is an amazing company. One which routinely delivers epic experiences for our fans on a scale that no one else can. I have nothing but admiration for the incredible team I have had the privilege to lead."
Posted by 9To5TechNews at 7:35 PM

Email ThisBlogThis!Share to TwitterShare to FacebookShare to Pinterest
Labels: Activision