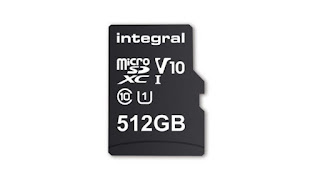 Integral Memory have announced that they are releasing a 512GB size microSDXC card. Currently the biggest memory card is SanDisk’s 400GB memory card which launched last year. Here’s the details with pricing to be announced at a later date:
Integral’s 512GB memory card has a Class 10 speed and a maximum transfer speed of 90MB/s. It is compatible with UHS-I standard.

This will be great for any Nintendo Switch owners who want to go digital only.
Posted by 9To5TechNews at 11:17 AM