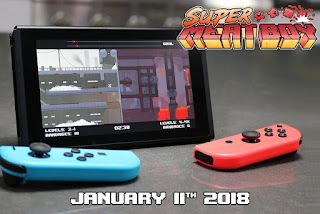 The wait is almost over for Super Meat Boy on Nintendo Switch, which is set to launch digitally via the Nintendo eShop on January 11. It will be equipped with a brand-new Race Mode – a feature that will initially be exclusive to players on Nintendo’s latest console. Meat Boy fans can also look forward to the upcoming randomly constructed sequel Super Meat Boy Forever in 2018.