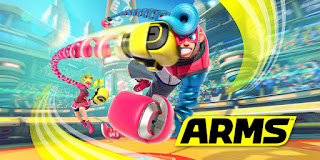 Nintendo has confirmed that post-launch support for  ARMS has ended with Version 5.0. The announcement came from Nintendo's update page, which, when translated reads as such: "As a major update, this one [the just released v.5 update] will be the last update. Of course, we will continue to adjust the game's balance in the future, so I hope you will continue to enjoy ARMS."
Posted by 9To5TechNews at 11:30 PM