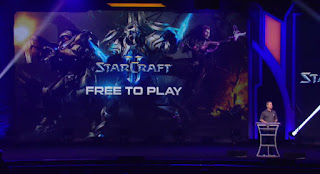 During the Blizzcon 2017 opening ceremony, Blizzard President and co-founder Mike Morahaime announced that Starcraft II is going free-to-play starting November 14. Players will have access to the full Wings of Liberty campaign and if you already have that campaign, you will receive the first expansion, Heart of the Swarm, for free. You’ll also receive the game's full ranked multiplayer ladder, and access to each of the game's commanders in the co-op mode until that character hits level 5.
Posted by 9To5TechNews at 10:04 AM