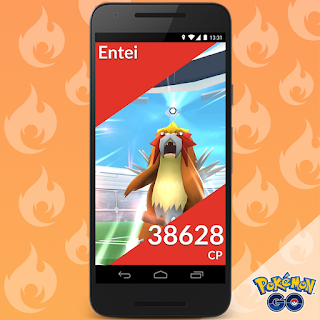 The 3 Legendary dog Pokemon (Entei, Raikou, Suicune) have been in rotation, appearing in Pokemon GO’s raid battles around the world. Today is Raiku's final day, and Niantic announced that Entei is the replacement. As of now, Entei is available in both North and South America. As for the others, Raikou has moved to Asia and Australia, and Suicune is in Euopre and Africa. Entei will be available in the Americas until October 31.

Get fired up, Trainers!🔥 Entei is now available in the Americas. pic.twitter.com/Gpjzjacu7B
— Pokémon GO (@PokemonGoApp) September 30, 2017