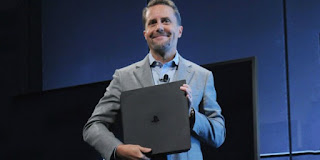 President of Sony Interactive Entertainment, Andrew House, has stepped down from his post. He was with the company for 27 years. House started at Sony in 1990, helping to usher in the popularity of the PlayStation brand. House became co-CEO of SIE, and eventually sole CEO when Kazuo Hirai got promoted to the head of the company in 2011, overseeing the PlayStation 4's meteoric rise over the last few years. House is remaining a chairman until the end of the year to ensure a smooth transition, but his deputy president John Kodera will be succeeding him at SIE.
Posted by 9To5TechNews at 5:22 PM