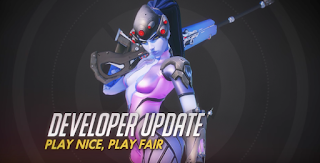 In the latest Overwatch developer update game director Jeff Kaplan discusses the increasing problem of player toxicity. As a multiplayer game, Overwatch has a lot of people who take the game seriously and take tend to take it out on other players, or people who harass others just because they can. In the video, Kaplan announces that a reporting system has finally been implemented on consoles, and most of the 480,000 disciplinary actions they have taken on accounts has been because of player reporting. He also explains that they're working hard to have in-game notifications for when a player's reporting has lead to action, as the current process is just through e-mail. Check out the developer update below.