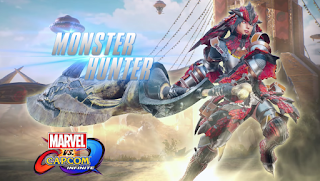 Marvel vs. Capcom: Infinite recently released this week and we already have a new character to look forward to. Monster Hunter from the Monster  Hunter series by Capcom will be a DLC character later this year. A new gameplay trailer featuring Monster Hunter gives you a taste of what she's like in action. Monster Hunter is part of the game's 2017 Character Pass, but no individual pricing details have been announced. Monster Hunter is said to be available later in 2017.