DOOM For Nintendo Switch Will Be 16GB, Multiplayer Is 9GB Download 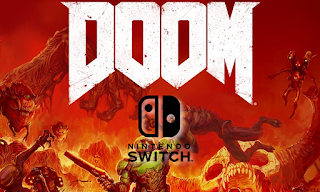 
“Finally, Bethesda said that the game’s single player campaign and arcade mode “fit on a 16 GB cartridge,” but that the multiplayer mode for the game, which will have to be downloaded after purchase, comes in at 9 GB.”
Posted by 9To5TechNews at 12:19 AM