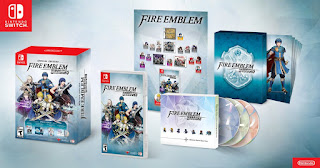 Nintendo has announced a Special Edition for Fire Emblem Warriors will be coming to North America on October 20th. Included will be 3 CDs, a dual-sided poster and 25 character art cards. It’s nice to see that we finally have a release date for the game. Thoughts ?