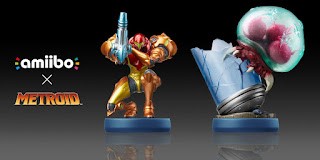 Nintendo has tried to explain and clear up the situation regarding the use of Amiibo in Metroid: Samus Returns with USGamer. You can read their response below as well as USGamer’s take on the problem.


“Yes, Fusion Mode—which will give players access to Samus’ Fusion Suit as well as a more challenging difficulty in the game—is indeed locked behind the Metroid amiibo. This content will not be offered as a separate DLC in Nintendo’s digital eShop. However, there will be a standard hard mode that will be unlockable once players complete the game on regular difficulty. This mode, which is confusingly separate from the Fusion Mode’s own harder difficulty, won’t be locked behind any amiibo.”
Posted by 9To5TechNews at 9:16 PM