Blizzard Announces That The Summer Games Will Return In Overwatch 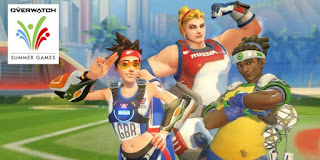 Blizzard has announced via a developer update that on August 8th until August 29th, Overwatch is bringing back the Summer Games. Summer Games 2016 was the first time Overwatch had a timed event with costumes and game modes made specifically for it. Lucioball, the soccer-style game mode that allows 2 teams of Lucios to compete against each other for goals, will be returning. However, Blizzard is adding a Sydney map and making a few balance changes. There will also be new Summer Games skins available, in addition to last year's skins coming back at a reduced prices. New 2017 Summer Games Cosmetic Items will cost the following:
Previous Summer Games cosmetics will be available at a reduced cost: