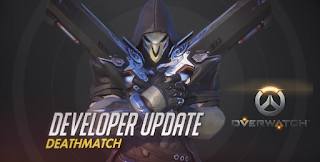 The Overwatch team has announced that the game is getting 2 new modes, Team Deathmatch and Deathmatch. Team Deathmatch has 2 teams competing to see which team can get to 30 kills first and Mercy's Resurrection ability takes a kill away from the other team. Deathmatch has every player for themselves, everyone competing with each other to get to 20 kills first. Several maps are being modified within the mode to accommodate the new gameplay. Additionally, a new map, Chateau Guillard, is being added specifically for Deathmatch. Blizzard has just added the new modes to the PTR servers for testing and will be added to the Overwatch Arcade mode when released. Check out a developer update on the new mode below.

UPDATE 8/29/17 - Deathmatch and Team Deathmatch is now live in the Arcade for Overwatch. The modes are available for a number of maps for a as well as a new map called Château Guillard. Here's the full list of maps: