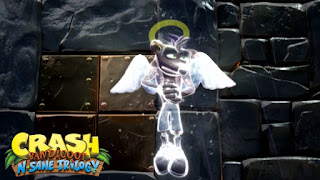 Activision has announced that the famously difficult Stormy Ascent level (which was cut from the original Crash Bandicoot) has been added to the N. Sane Trilogy as DLC. You can check out a trailer for the new level below. You can download it for free until August 21, after which the level will be $2.99.


On the PlayStation Blog, you can find a discussion about the level between N. Sane Trilogy's director, Dan Tanguay, and the level's original designer, Taylor Kurosaki. The level is 4x longer than the typical Crash level, and was cut at the last minute due to its extreme difficulty. It was not entirely removed from the disc however, and fans were able to find the level using a Game Shark.
Posted by 9To5TechNews at 11:38 PM