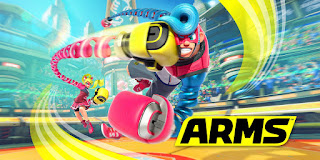 ARMS will be receiving a huge update tomorrow that will see a number of new things introduced to the  fighting title. As you already know, Max Brass will be a playable character which will give players a new character to play around with and familiarize. The 2.0 update also includes the brand new Hedlok mode and also some tweaking with the balance and a full changelog will be published alongside the update.
“I can talk about it a little bit now – Max Brass is the main part of tomorrow’s update, but there is a new versus mode where in a fight between two or three players there’s a Hedlok mask players battle over, and when you get the mask your own character can turn into Hedlok,” Arms producer Kosuke Yabuki explained. “If one player turns into Hedlok it’ll be up to the other players to take him down. The Hedlok mode won’t just be available in one v one versus modes – it’ll be available online and in every multiplayer mode.”


“One thing with a balance update – if you say we’ve nerfed this character, fans of that character won’t be happy about it! That’s something we’re aware of, and with this update the balance adjustments are done in a way not to make any character less good than they are at the moment.”
Posted by 9To5TechNews at 2:05 PM