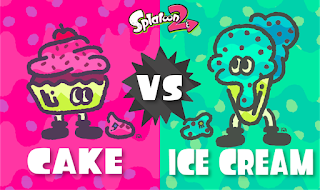 Team Ice Cream is victorious over Team Cake in the first North American Splatoon 2 Splatfest. The contest was based on 3 categories; Votes, Solo, and Team. Announcers Pearl and Marina revealed that Team Cake had in fact won 53% of Team battles, but Team Ice Cream won 51% of Solo matches and 76% of Votes, clinching their victory.
Posted by 9To5TechNews at 6:15 PM