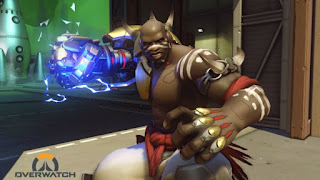 Overwatchs latest hero, who Doomfist was announced earlier this month, now has a release date of July 27. Doomfist is an offense hero, similar to the likes of Reaper and Tracer. He wields a hand cannon that can be used for ranged damage, and can also slam into the ground, knocking enemies off their feet. As for melee, Doomfist has a Rocket Punch that deals damage up close. Blizzard released a video of Doomfist's powers and giving more background on his development and design. You can watch the video below.
Posted by 9To5TechNews at 9:17 PM